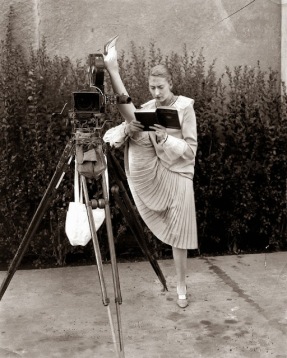 Charlotte Greenwood rests between takes: MGM studios, 1928. As you do.

Each episode, we ask our guests to recommend any writing by women they’ve read and loved lately.

We add their suggestions here, too, along with some of our own. It’s your ultimate To-Be-Read pile.

Mira Robertson recommends:
Black Diamonds: the rise and fall of the English Dynasty by Catherine Bailey

Texts mentioned in our round-table on academic writing include:

Adams, Mary Louise, 1997. The Trouble with Normal: Postwar Youth and the Making of Heterosexuality, University of Toronto Press, Toronto. (Recommended by Serena Petrella.)

Stengers, Isabelle 2015. In Catastrophic Times: Resisting the Coming Barbarism, Open Humanities Press/Meson Press – or anything at all by her. (Recommended by Chantelle Gray van Heerden.)

(See what we did there? Harvard, baby.)

And the writing/autobiographies mentioned are:

And can’t wait to get her hands on:

Harmony by Carolyn Parkhurst
Autumn by Ali Smith
The Dark Flood Rises by Margaret Drabble
All My Puny Sorrows by Miriam Toews
The Cazalet Chronicles by Elizabeth Jane Howard
Audiobooks of Helen Garner’s Everywhere I Look and The Spare Room.
And the favourite Jane Austen documentaries, projects and adaptations mentioned include:
Pride and Prejudice: Having a Ball (documentary with Amanda Vickery)
The Lizzie Bennet Diaries (2012 web series)
Bride and Prejudice (2004 Bollywood version)
Death Comes to Pemberley (2012 TV series of PD James’ Austen fanfic)
Emma (2009 mini-series with Romola Garai as Emma)
Mansfield Park (1999 film by Patricia Rozema with Frances O’Connor as Fanny)
Mansfield Park (2007 TV film with Billie Piper as Fanny)
Northanger Abbey (which nobody but Kelly likes – this is the 2007 version with Felicity Jones as Catherine Morland)
Persuasion (1995 series with Amanda Root and Ciaran Hinds)
Pride and Prejudice (definitive 1995  BBC series with Jennifer Ehle and Colin Firth)
Pride and Prejudice (Kylie’s beloved 1980 TV series with Elizabeth Garvie as Lizzy)
Pride and Prejudice (2005 film with Keira Knightley and Mathew Macfadyen)
Sense and Sensibility (1995 film with Emma Thompson and Kate Winslet).